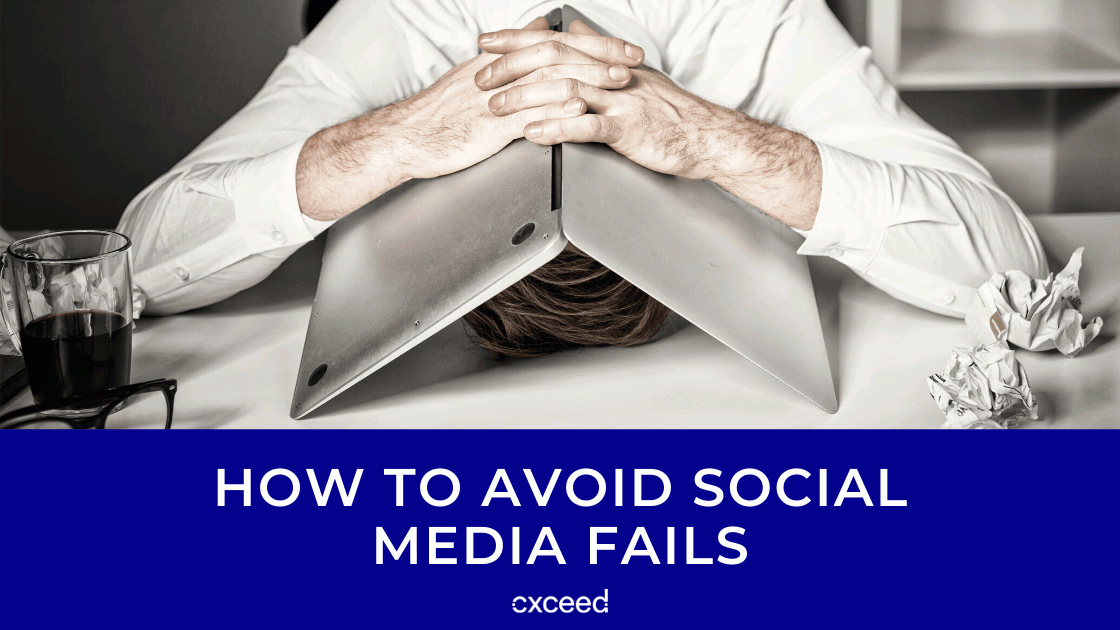 How To Avoid Social Media Fails

It's 2020, and more than 3.5 billion people worldwide have a social media account.

That's a lot of people 3.5 billion people who can view any social media fail your company could accidentally make - that's a scary thought.

That number is only going to increase, and so are the dangers of social media for the naive.

Whilst it is essential for a business to be active online, understanding how the digital world works, and how to deal with social media fails is crucial.

Social Media is a Slippery Slope

Social media is undoubtedly one of the best ways to market your business, and it can often be done for free!

However, a complaint on Facebook or Twitter is very different from a customer calling up to complain. It's there for everyone to see in the public domain. Out in the open for people to share, comment on, and ultimately, add fuel to the fire.

The worst part about social media from a business' perspective is that customers don't hold back. A small mistake or error can and often is blown out of proportion and their reputation up in smoke.

Why Do Social Media Campaigns Fail?

Campaigns failing can be through a lack of training or poor execution.

An idea may seem good on paper in a warm cushy planning office, but it doesn't mean the transition to the cold, harsh reality of the internet. Thorough research is required to make sure you get everything right, from the target audience, to graphics, to the message you want to get across. One simple oversight can turn into a disaster.

Here are some reasons why social media campaigns fail and to avoid the embarrassment of posting one. I know you'll want to see some of the worst offenders, so I've included some examples of how wrong it can go.

Keyword bots that automatically reply to certain keywords in a post or question. Sounds like a good idea to get a message to people without having to do the legwork, but it does have its downfalls.

While some people are happy to have an instant solution, it can show your customers that you don't care, especially when the automated response doesn't make sense.

Depending on the keywords companies set their auto-replies to, they can also be made to look very, very silly. Just ask Snapchat... 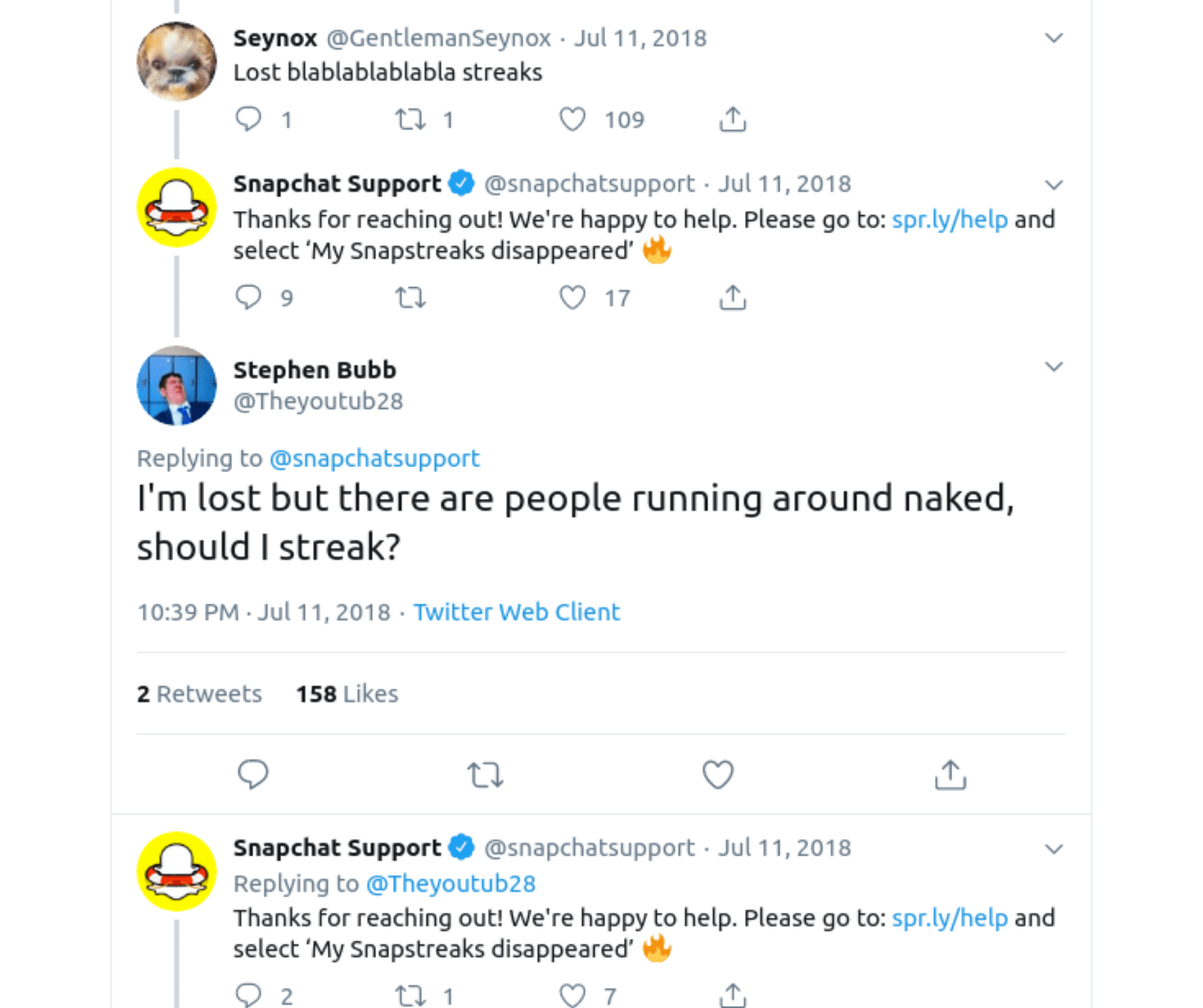 I hope Stephen got the answer he was looking for in that link!

For larger companies who don't have the time to reply to each post individually, it can be a good idea. For smaller businesses, having a human with a brain (hopefully) and eyes, personally reply to messages is a good idea.

Robots haven't sufficiently developed real understanding yet and the personal touch you and your staff provide will go a long way to improve customer experience.

Remember, Not Everyone Will Find it Funny

There's nothing like a bit of banter on social media.

It allows businesses to show they are human, and that joke might just go viral - free advertising! But it's not good to go viral for the wrong reasons.

Business social media fails often come from the posters' sense of humour that isn't shared or appreciated with their audience.

What I find funny or offensive is more than likely going to be different from yours.

If your team is thinking of being funny, sometimes it's best to have a quick sweep around the office to make sure it won't be misconstrued when posted. Better safe than sorry.

Cinnabon thought they were clever with their Carrie Fisher tweet shortly after she passed away: 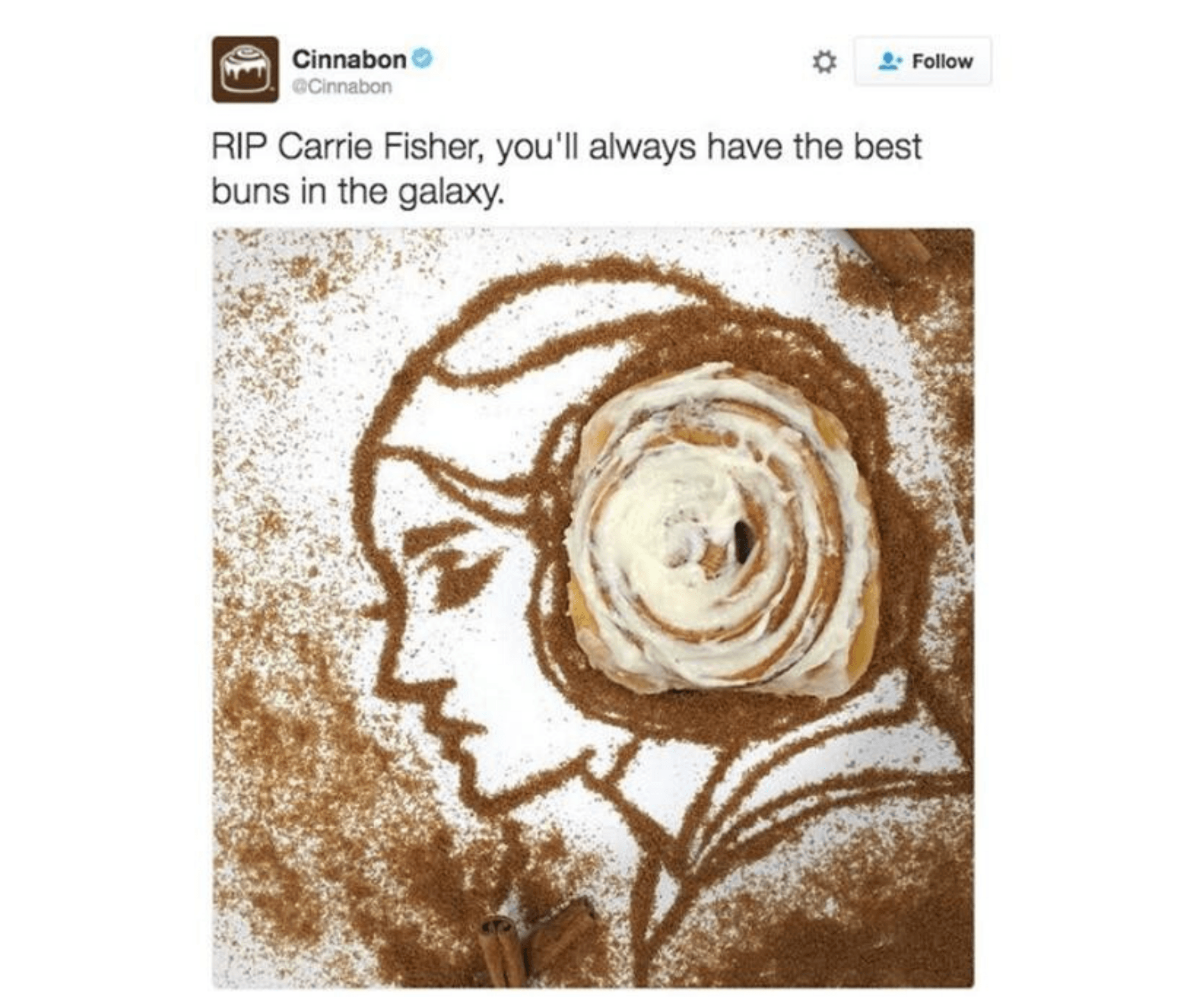 For those of you not into Star Wars, Carrie Fisher had a strong dislike for her iconic 'bun' hairstyle.

Having "the best buns" also has more than one meaning, but I'll let you work that one out.

Star Wars fans are very passionate, and I can only imagine a lot of them refused to buy from Cinnabon after this!

Behind every account, there's a human (most of the time). We all feel passionate about certain topics, people, but personal opinion can't be brought into business.

Anyone with access to official account must know that, or they might bear the brunt of angry customers whose opinions and values don't quite line up.

Let's have an example.

Whether you're a football fan or not, I'm sure you know all about the whole 'who is better, Messi or Ronaldo?' debate.

Well, someone at Pepsi really loves Messi, or really hates Ronaldo - I can't quite work out which it is.

I'm not sure what this has to do with a sugary, fizzy drink, but it didn't work: 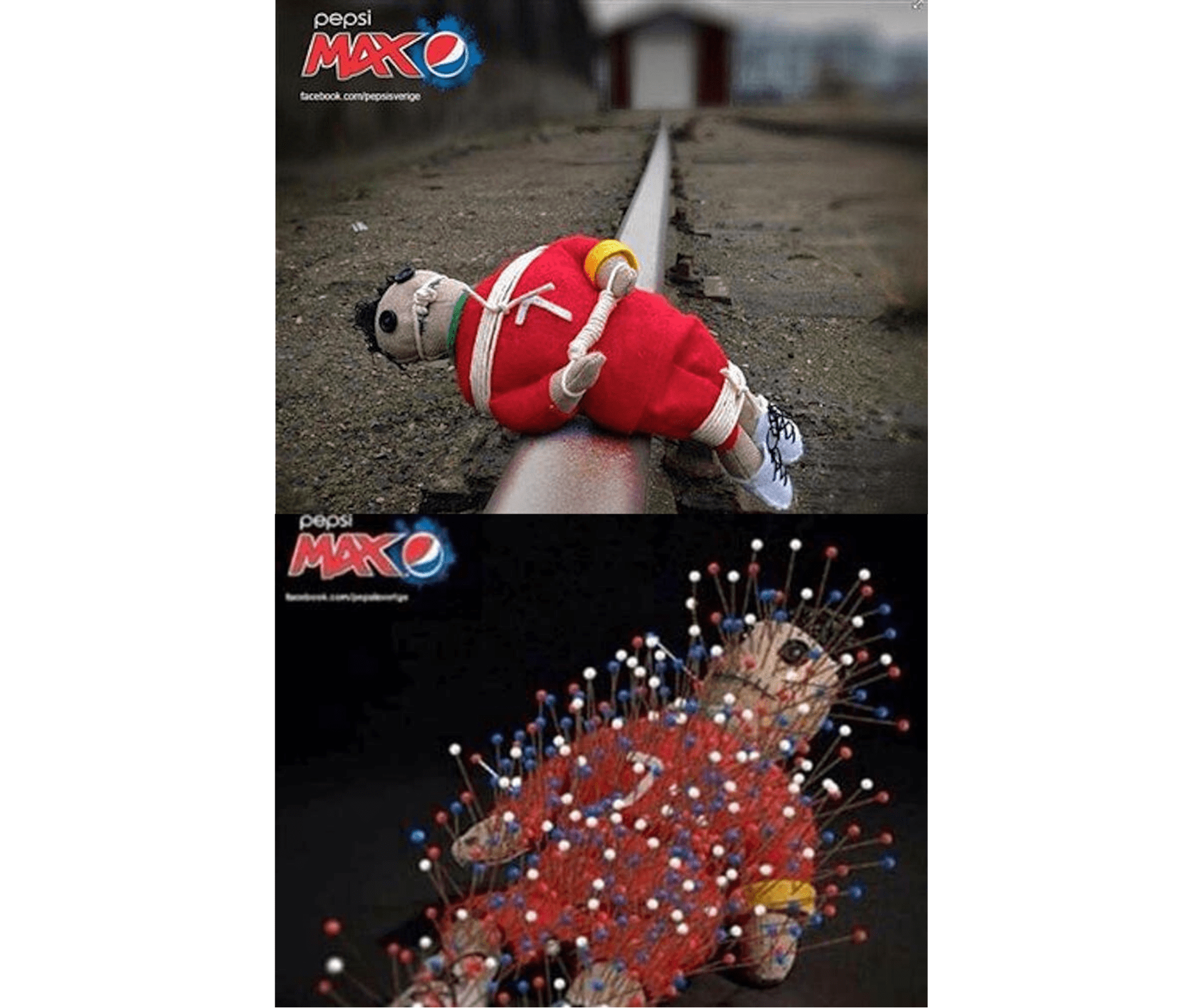 The voodoo doll ad was posted on the day of a World Cup Qualifier, but apparently voodoo doesn't exist as the doll had no effect and Ronaldo bagged a hat-trick.

Pepsi realised their error, pulled the Facebook ad and apologised, but not before 130,000 people had already liked a Facebook group called "I will never drink Pepsi again."

Moral of the story? Don't bring your personal opinion into business and whatever you do, don't upset Messi and Ronaldo fans!

Be Aware of the World

There are certain things which are simply unacceptable to say or do.

Whether it be an old-fashioned stereotype, political message or a choice of words that can be related to a horrible incident, just avoid them at all cost.

People get offended at many things and then others brand them 'snowflakes'. Sometimes things are actually offensive and are more avoidable than others - businesses need to make sure they know what's going on around them and their audience.

Is this something which is going to offend a large group of people? It is? Then don't post it, its not rocket science.

I get it, safe is boring; just know the unwritten rules and boundaries, and save a lot of hassle. 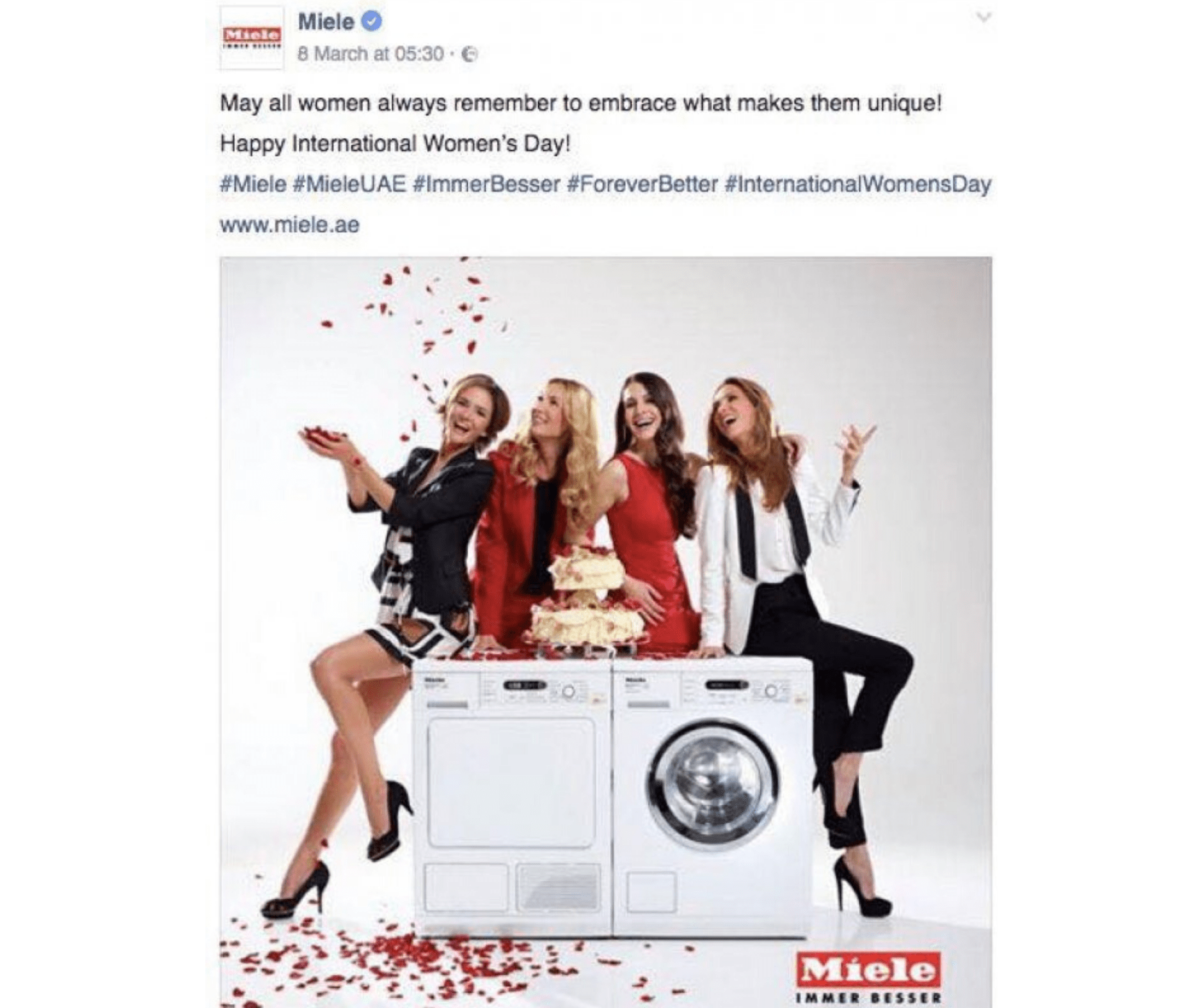 Four women, standing around a washing machine, like a stereotypical 1940s poster.

"May all women always remember to embrace what makes them unique" it says as they all gather around the machine.

Not the smartest idea to annoy nearly half of the world population.

Their intentions were probably in the right place (I hope), the social media post was just a bit... off.

Look Out for Customer's In-Directs

Not everyone knows how to spell a companies name!

Research by Conversocial suggests that only around 3% of customer service related questions on Twitter contain the correct brand name spelling. The rest either misspell or just mention the company without @'ing them.

Businesses should do a quick search of their name with misspellings and see what comes up to connect to all of their customers.

They might be able to prevent a customer from getting upset because the account they tried to speak to hasn't been active for 5 years!

Since customers are always on social media, they expect businesses to be too.

In a way, it bears resemblance to emailing: you send a message to the company and wait for a reply. However, the nature of social media has changed expectations.

They want replies now, but now is too late - they wanted them 30 seconds ago. Being built around live feeds has created the illusion that businesses should reply to the message as soon as it's sent.

Of course, we know this isn't the case, especially for smaller businesses. Not everyone has time to be monitoring accounts 24/7, but a conscious effort to regularly check all communications channels would be lovely.

The quicker a reply, the better!

So, now you've seen the things to avoid, what can you do going forward to improve your business?

The best way to make sure your businesses social media strategies don't fail is to make sure everyone is on the same page.

Draw up a policy or plan which all your staff can follow. Outline what is not acceptable such as politic related posts or foul language, and then there are clear guidelines to follow.

At the start of your social media campaigns, managers should work closely with the team to ensure their visions are aligned. When trust and understanding is built up, give your marketeers the creative freedom they desire.

Managers and PR should also work closely to have a Plan B in case things go pear shaped - if you plan for the worse, you will be prepared for it

Having said that, even the best make mistakes.

What steps do you take to avoid any social media mistakes? Let us know in the comments.

Discover how Cxceed can help improve your customer experience, and boost your profit.

How to Deal with Sales Rejection

10 Do’s and Don’ts When Dealing with Difficult Customers

How to Respond to a Negative Review

Why Do Call Agents Talk So Loudly On The Phone?

Why You NEED To Ditch Performance Appraisals

We use cookies to ensure that we give you the best experience on our website. If you continue to use this site we will assume that you are happy with it.OkCookie policy